The Pillars of the Earth (Mass Market Paperbound) 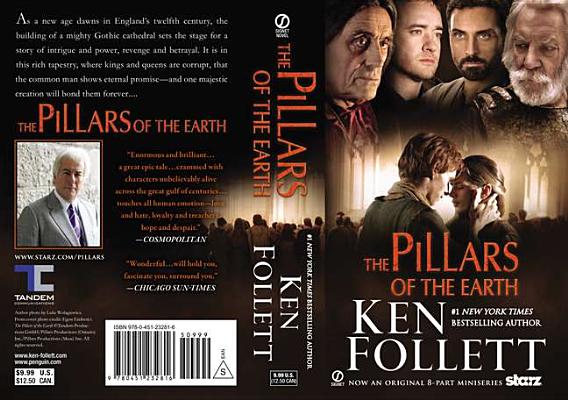 By Ken Follett
$9.99
Email or call for price

#1 New York Times Bestseller Oprah's Book Club Selection If you liked the Century Trilogy, you'll love the "extraordinary . . . monumental masterpiece" (Booklist) that changed the course of Ken Follett's already phenomenal career. "Follett risks all and comes out a clear winner," extolled Publishers Weekly on the release of The Pillars of the Earth. A departure for the bestselling thriller writer, the historical epic stunned readers and critics alike with its ambitious scope and gripping humanity. Today, it stands as a testament to Follett's unassailable command of the written word and to his universal appeal. The Pillars of the Earth tells the story of Philip, prior of Kingsbridge, a devout and resourceful monk driven to build the greatest Gothic cathedral the world has known . . . of Tom, the mason who becomes his architect--a man divided in his soul . . . of the beautiful, elusive Lady Aliena, haunted by a secret shame . . . and of a struggle between good and evil that will turn church against state and brother against brother. A spellbinding epic tale of ambition, anarchy, and absolute power set against the sprawling medieval canvas of twelfth-century England, this is Ken Follett's historical masterpiece.

Ken Follett is one of the world's best-loved authors, selling more than 160 million copies of his thirty books. Follett's first bestseller was Eye of the Needle, a spy story set in the Second World War. In 1989 The Pillars of the Earth was published, and has since become the author's most successful novel. It reached number one on bestseller lists around the world and was an Oprah's Book Club pick. Its sequel, World Without End, proved equally popular, and the Kingsbridge series has sold 38 million copies worldwide. The third book, A Column of Fire, will be published by Viking in Fall 2017. Follett lives in Hertfordshire, England, with his wife Barbara. Between them they have five children, six grandchildren, and three Labradors.

This feature require that you enable JavaScript in your browser.
END_OF_DOCUMENT_TOKEN_TO_BE_REPLACED

This feature require that you enable JavaScript in your browser.
END_OF_DOCUMENT_TOKEN_TO_BE_REPLACED

This feature require that you enable JavaScript in your browser.
END_OF_DOCUMENT_TOKEN_TO_BE_REPLACED