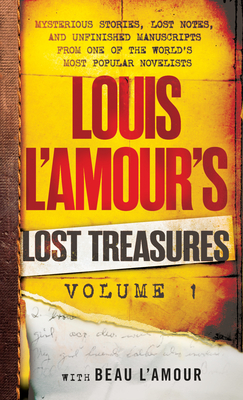 The first of its kind, a unique volume of twenty-one unpublished gems from one of the twentieth century’s most popular and prolific writers

Using his father’s handwritten notes, journal entries, and correspondences, Beau L’Amour uncovers how and why many never-before-seen manuscripts were written—and speculates about the ways they might have ended.

These selections celebrate L’Amour’s vision and virtuosity, including the first seven chapters of a powerful novel about the Trail of Tears, a chilling Western horror story, and a tale of the American Revolution featuring a character related to L’Amour’s well-known Sackett family. At the other end of the spectrum are classic adventures, such as The Golden Tapestry, set in 1960s Istanbul, as well as several uniquely different attempts at what would have been the most profoundly intimate of all of L’Amour’s novels, a saga of reincarnation that stretches from a time before time, to the period of Alexander the Great, and on to Warlord-Era China.

Illustrated with rare photographs, this book reveals the L’Amour you have never known, his personal struggles as a writer, and the contest between mortality and a literary legacy too big for one life to contain.

“Lost treasures indeed . . . a behind-the scenes look at the unpublished work and unrealized aspirations of an iconic writer of Westerns.”—Kirkus Reviews

Louis L’Amour’s Lost Treasures is a project created to release some of the author’s more unconventional manuscripts from the family archives.

In Louis L’Amour’s Lost Treasures: Volumes 1, Beau L’Amour takes the reader on a guided tour through many of the finished and unfinished short stories, novels, and treatments that his father was never able to publish during his lifetime. L’Amour’s never-before-seen first novel, No Traveller Returns, faithfully completed for this program, is a voyage into danger and violence on the high seas. These exciting publications will be followed by Louis L’Amour’s Lost Treasures: Volume 2.

Additionally, many beloved classics will be rereleased with an exclusive Lost Treasures postscript featuring previously unpublished material, including outlines, plot notes, and alternate drafts. These postscripts tell the story behind the stories that millions of readers have come to know and cherish.

Our foremost storyteller of the American West, Louis L’Amour has thrilled a nation by chronicling the adventures of the brave men and woman who settled the frontier. There are more than three hundred million copies of his books in print around the world.

Beau L’Amour is a writer, art director, and editor. He has written and produced several films, including USA Network’s The Diamond of Jeru. Since 1988 he has been the manager of the estate of his father, Louis L’Amour.

“Lost treasures indeed . . . a behind-the scenes look at the unpublished work and unrealized aspirations of an iconic writer of Westerns.”—Kirkus Reviews

This feature require that you enable JavaScript in your browser.
END_OF_DOCUMENT_TOKEN_TO_BE_REPLACED

This feature require that you enable JavaScript in your browser.
END_OF_DOCUMENT_TOKEN_TO_BE_REPLACED

This feature require that you enable JavaScript in your browser.
END_OF_DOCUMENT_TOKEN_TO_BE_REPLACED