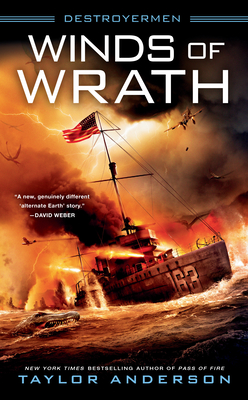 This is book number 15 in the Destroyermen series.

Matt Reddy and the crew of the USS Walker are positioned to push the line of battle to the breaking point on an alternate Earth, in the thrilling return to the New York Times bestselling Destroyermen series.

Matt Reddy and his sailors have fought, bled, and died for their Lemurian friends and other allies from across time, but their enemies are still operational. In Africa, the Grik General Esshk has escaped defeat to build a new army and new weapons, and is desperate enough to use them to destroy the world if he can't have it.

In South America, the NUS, General Shinya, and the Army of the Sisters have the evil Dominion on the ropes and are closing in on the seat of its blood-drenched power, but the twisted Don Hernan has struck a deal with the fascist League, and Victor Gravois is finally assembling the awesome fleet of modern ships he's always craved. If he's successful, the war will be lost.

Undermined by treachery on a stunning scale, Matt Reddy must still steam his battered old ship halfway around the world, scraping up what forces he can along the way, and confront the mightiest armada the world has ever seen in a fiery duel to the death.

Taylor Anderson is the New York Times bestselling author of the Destroyermen novels. A gunmaker and forensic ballistic archaeologist, Taylor has been a technical and dialogue consultant for movies and documentaries and is an award-winning member of the National Historical Honor Society and of the United States Field Artillery Association.

"Anderson's world-spanning Destroyermen saga comes to a tense and well-crafted climax in the thoroughly satisfying 15th and final entry. . . . Anderson sends the series out with a bang."--Publishers Weekly (starred review)

"The fact that Anderson has a gift for complex plot and dialogue and a fabulous sense of humor makes reading his work a fun and guilt-free pleasure."--North County Times (CA)

"If you like a fun tale set in a well-developed world, pick up the Destroyermen series and kick back and enjoy."--SFRevu

This feature require that you enable JavaScript in your browser.
END_OF_DOCUMENT_TOKEN_TO_BE_REPLACED

This feature require that you enable JavaScript in your browser.
END_OF_DOCUMENT_TOKEN_TO_BE_REPLACED

This feature require that you enable JavaScript in your browser.
END_OF_DOCUMENT_TOKEN_TO_BE_REPLACED