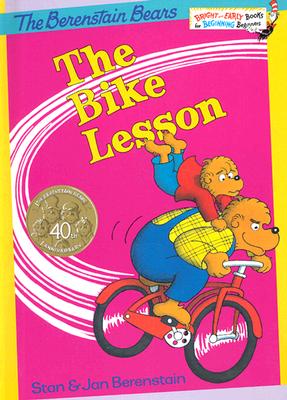 Literary legends Stan and Jan Berenstain take readers for a ride in this classic Beginner Book edited by Dr. Seuss. Small Bear has a new bike, but before he can ride it, his dad insists on a teaching him about bike safety. From learning how to stop and turn to going down a hill and traveling roads you know, Small Bear has a lot to learn. And Father Bear has an unforgettable way of showing his son all the tricks of biking. The second in the beloved Berenstain Bears series, The Bike Lesson is the Tour de France of funny tales for early readers.

Originally created by Dr. Seuss, Beginner Books encourage children to read all by themselves, with simple words and illustrations that give clues to their meaning.

* Stan and Jan Berenstain were both born in 1923 in Philadelphia. They didn't know each other as children, but met later at school, at the Philadelphia College of Art. They liked each other right away, and found out that the both enjoyed the same kinds of books, plays, music and art.

* During World War II, Stan was a medical assistant in the Army, and Jan worked in an airplane factory. When the war was over, they got married and began to work together as artists and writers, primarily drawing cartoons for popular magazines.

* After having their two sons Leo and Michael, the Berenstains decided to write some funny children's books that their children and other children could read and enjoy.

* Their first published children's book was called " The Big Honey Hunt ." It was about a family of bears, who later became known as the "Berenstain Bears."

* Over 50 children's books later, Stan and Jan still plan all of their books together -- both write the stories, and both write the pictures. They live outside of Philadelphia in the country.

This feature require that you enable JavaScript in your browser.
END_OF_DOCUMENT_TOKEN_TO_BE_REPLACED

This feature require that you enable JavaScript in your browser.
END_OF_DOCUMENT_TOKEN_TO_BE_REPLACED

This feature require that you enable JavaScript in your browser.
END_OF_DOCUMENT_TOKEN_TO_BE_REPLACED