First Test: Book 1 of the Protector of the Small Quartet (Paperback) 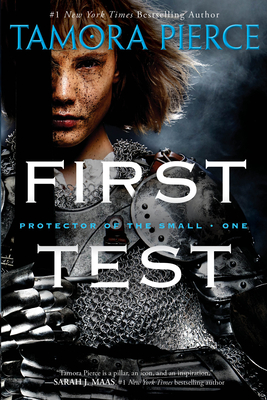 Kel will not allow this first test to be her last. Her adventure begins in the New York Times bestselling series from the fantasy author who is a legend herself: TAMORA PIERCE.

Keladry of Mindelan is the first girl who dares to take advantage of a new rule in Tortall—one that allows females to train for knighthood. After years in the Yamani Islands, she knows that women can be warriors, and now that she’s returned home, Kel is determined to achieve her goal. She believes she is ready for the traditional hazing and grueling schedule of a page. But standing in Kel’s way is Lord Wyldon. The training master is dead set against girls becoming knights. He says she must pass a one-year trial that no male page has ever had to endure. It’s just one more way to separate Kel from her fellow trainees. But she is not to be underestimated. She will fight to succeed, even when the test is unfair.

More timely than ever, the Protector of the Small series is Anti-Bullying 101 while also touching on issues of bravery, friendship, and dealing humanely with refugees against a backdrop of an action-packed fantasy adventure.

"Tamora Pierce's books shaped me not only as a young writer but also as a young woman. She is a pillar, an icon, and an inspiration. Cracking open one of her marvelous novels always feels like coming home."
—SARAH J. MAAS, #1 New York Times bestselling author

TAMORA PIERCE is the #1 New York Times bestselling author of over eighteen novels set in the fantasy realm of Tortall. She captured the imagination of readers with her debut novel, Alanna: The First Adventure. Since then, her bestselling and award-winning titles have pushed the boundaries of fantasy and young adult novels to introduce readers to a rich world populated by strong, believable heroines. She has been the guest of honor at numerous conventions, and her books have been translated into many languages and are available on audio. She is the winner of the Romantic Times Book Reviews Career Achievement Award, the Skylark Edward E. Smith Memorial Award for Imaginative Fiction, and the Margaret A. Edwards Award for her "significant and lasting contribution to young adult literature." Pierce lives in Syracuse, New York, with her husband, Tim, and their cats, birds, and occasional rescued wildlife. Visit her at TamoraPierce.com and follow her on Twitter at @TamoraPierce.

“Tamora Pierce is a seminal figure in the fantasy field of writing, turning out one terrific book after another.”
—TERRY BROOKS, New York Times bestselling author of the Sword of Shannara trilogy

“In the world of YA fantasy, there’s before Tamora Pierce, and then after her female heroes started kicking down the doors (and walls, and other barriers)!”
—BRUCE COVILLE, New York Times bestselling author

“Tamora Pierce is a trailblazer for so many fantasy writers, hacking through the old tropes with her narrative machete and showing us that girl-centered adventures are not just possible but amazing.”
—RACHEL HARTMAN, New York Times bestselling author

“Tamora Pierce is gloriously unafraid to give her readers joy and laughter along with adventure and struggle, to let us love her characters wholeheartedly and find the best of ourselves in them.”
—NAOMI NOVIK, New York Times bestselling author

“Tamora Pierce and her brilliant heroines didn’t just break down barriers; they smashed them with magical fire.”
—KATHERINE ARDEN, author of The Bear and the Nightingale

“Tamora Pierce is the queen of YA fantasy, and we are all happy subjects in her court.”
—JESSICA CLUESS, author of A Shadow Bright and Burning

“Tamora Pierce’s novels gave me a different way of seeing the world. They were like nothing I’d encountered before. Alanna stormed her way into my thirteen-year-old heart and told me that I could write gorgeous, complicated novels about vibrantly real people in fantastic situations, and to be honest, she’s never left.”
—ALAYA DAWN JOHNSON, award-winning author of Love Is the Drug

This feature require that you enable JavaScript in your browser.
END_OF_DOCUMENT_TOKEN_TO_BE_REPLACED

This feature require that you enable JavaScript in your browser.
END_OF_DOCUMENT_TOKEN_TO_BE_REPLACED

This feature require that you enable JavaScript in your browser.
END_OF_DOCUMENT_TOKEN_TO_BE_REPLACED