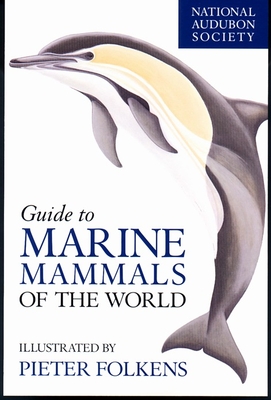 Written by a team of experts and featuring hundreds of illustrations, photographs, and maps, the most authoritative, up-to-date, and accessible information on marine mammals--perfect for your outdoor excursions or your home library.

The National Audubon Society Guide to Marine Mammals of the World describes in fascinating detail all 120 species of the world's whales, dolphins, porpoises, seals and sea lions, manatees, Marine and Sea Otters, and the Polar Bear. Organized by the four major groups of marine mammals—marine fissipeds, pinnipeds, cetaceans, and sirenians—the species descriptions include:

Full-color paintings, color photographs showing appearance in the wild and illustrating typical behaviors, life history data, range and habitat text and a full-color range map based on the most current information. Facts about social organization, surface behaviors, swimming, and diving. Information on mating behavior, breeding, and the rearing of young. Details about food items and foraging techniques. Estimates of population in the wild, plus current and historic threats.

Introductions to groups include comparative size illustrations, discussion of behaviors particular to the group, and other unique features.

A useful illustrated glossary of terms and an index of species names complete the guide.

Pieter A. Folkens (illustrator) is widely acknowledged as one of the finest illustrators of marine mammals in the world. He has contributed to many books, including The Sierra Club Handbook of Seals and Sirenians and The Encyclopedia of Marine Mammals (Academic Press). He has also designed cetaceans for motion pictures and television, including the films Star Trek IV, Flipper, and Free Willy. He is a founding board member of the Alaska Whale Foundation, a non-profit marine mammal research and conservation organization, and spends his summers in Alaska studying the feeding ecology of Killer and Humpback Whales. Folkens lives in Benicia, California.

Randall R. Reeves (Sperm Whales, Beaked Whales, River Dolphins, Beluga and Narwhal, Ocean Dolphins, Porpoises, Glossary) has been involved in marine mammal work for over 25 years, ranging from field studies in the Arctic, the North Atlantic, and the Indus and Amazon Rivers, to archival research on the history of whaling. He co-authored The Sierra Club Handbook of Whales and Dolphins and The Sierra Club Handbook of Seals and Sirenians and edited Conservation and Management of Marine Mammals (Smithsonian). Reeves holds a Ph.D. from McGill University, Canada. Since 1997, he has served as chairman of the Cetacean Specialist Group of the World Conservation Union (IUCN). Reeves lives in Hudson, Quebec.

Phillip J. Clapham (Introduction, Baleen Whales) is a leading expert on large whales. He has conducted research on a variety of whale species around the world and has written or contributed to several books, including Humpback Whales (Voyageur Press), Whales of the World (Voyageur Press), and The Complete Book of North American Mammals (Smithsonian). Clapham earned a Ph.D. in Biology from the University of Aberdeen in Scotland. He is a Research Associate at the Smithsonian Institution in Washington, D.C., and lives and works in Woods Hole, Massachusetts, where he directs a research program on large whales.

Brent S. Stewart (Polar Bear and Otters, Pinnipeds) has been studying and writing about marine mammals since the late 1970s. He has published many articles on marine mammals and contributed to several books, including The Smithsonian Book of North American Mammals and The Sierra Club Handbook of Seals and Sirenians. He earned a Ph.D. from the University of California, Los Angeles, and a J.D. from the University of California, Berkeley. Stewart is a Senior Research Biologist at Hubbs-SeaWorld Research Institute in San Diego, California, and Marine Science and Foreign Affairs Officer with the State Department in Washington, D.C.

James A. Powell (Sirenians) is recognized as an international expert on manatees. For the past thirty years he has conducted field research on sirenians around the world from Florida to the West Indies and Belize, and has spent ten years in remote areas of western Africa studying the West African Manatee. He earned a Ph.D. in Zoology from Cambridge University, England. He is co-chair of the Sirenia Specialist Group of the World Conservation Union (IUCN). Powell is the Director for Aquatic Programs for the Wildlife Trust in Sarasota, Florida.

"This wonderful synthesis of paintings, photographs, and text is a fitting tribute to all the majestic mammals that once left the world's waters, evolved on land, and then returned to the sea."
-Carl Zimmer, author of At the Water's Edge and Evolution: The Triumph of an Idea

"This comprehensive and beautifully illustrated work allows a much deeper appreciation of these incredible creatures."
–Carl Safina, Ph.D., author of "Song for the Blue Ocean" and "Eye of the Albatross"

This feature require that you enable JavaScript in your browser.
END_OF_DOCUMENT_TOKEN_TO_BE_REPLACED

This feature require that you enable JavaScript in your browser.
END_OF_DOCUMENT_TOKEN_TO_BE_REPLACED

This feature require that you enable JavaScript in your browser.
END_OF_DOCUMENT_TOKEN_TO_BE_REPLACED