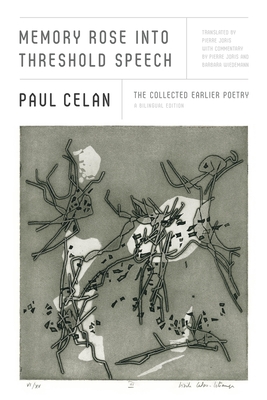 Celan, a Bukovinian Jew who lived through the Holocaust, created work that displays both great lyric power and an uncanny ability to pinpoint totalitarian cultural and political tendencies. His quest, however, is not only reflective: there is in Celan's writing a profound need and desire to create a new, inhabitable world and a new language for it. In Memory Rose into Threshold Speech, Celans reader witnesses his poetry, which starts lush with surrealistic imagery, become gradually pared down; its syntax tightens and his trademark neologisms and word formations increase toward a polysemic language of great accuracy that tries, in the poet's own words, "to measure the area of the given and the possible."

Translated by the prize-winning poet and translator Pierre Joris, this bilingual edition follows the 2014 publication of Breathturn into Timestead, Celan's collected later poetry. All nine volumes of Celan's poetry are now available in Joris's carefully crafted translations, accompanied here by a new introduction and extensive commentary. The four volumes in this edition show the flowering of one of the major literary figures of the last century.

Paul Celan was born in Czernowitz, Bukovina, in 1920, and is considered by many to be the greatest German-language poet of the second half of the twentieth century. He survived the Holocaust and settled in Paris in 1948, where he lived and wrote until his suicide in 1970. His poetry collections include Poppy and Memory, Speechgrille, Breathturn and Timestead. His prose is gathered in Microliths they are, Little Stones. He remains probably best known for his poem "Todesfuge" ("Death Fugue").

"For half a century Pierre Joris has been living with the poetry of Paul Celan. With the publication of Breathturn into Timestead and Memory Rose into Threshold Speech his life's task is completed: a rendering into English of the entire German oeuvre of one of the great poetic presences of the twentieth century. Joris's translations are supple, lively, and as close as we will ever get to the sense of a body of poetry that continually challenges the boundaries of language." J. M. Coetzee, winner of the Nobel Prize in Literature

"Celans poetry is elliptical, ambiguous, resisting easy interpretation. Perhaps for this reason, it has been singularly compelling to critics and translators, who often speak of Celans work in quasi-religious terms . . . Pierre Joris, in the introduction to Memory Rose Into Threshold Speech (Farrar, Straus & Giroux), his new translation of Celans first four published books, writes that hearing Celans poetry read aloud, at the age of fifteen, set him on a path that he followed for fifty years . . . Joriss extensive commentary is a gift to English readers." Ruth Franklin, The New Yorker

"Compiling Celans first four books into one volume highlights his growth as a writer and thinker, paring language to its essentials." The New York Times

"What a privilege to read Paul Celan, one of the great voices of contemporary poetry, through Pierre Joris." Katherine Hedeen, Kenyon Review

This feature require that you enable JavaScript in your browser.
END_OF_DOCUMENT_TOKEN_TO_BE_REPLACED

This feature require that you enable JavaScript in your browser.
END_OF_DOCUMENT_TOKEN_TO_BE_REPLACED

This feature require that you enable JavaScript in your browser.
END_OF_DOCUMENT_TOKEN_TO_BE_REPLACED