All the Odes: A Bilingual Edition (Hardcover) 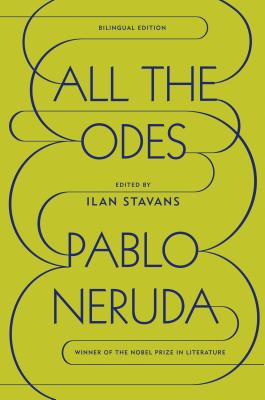 By Pablo Neruda, Ilan Stavans (Editor)
Email or call for price and availability
Out of Print

A career-spanning volume, charting the Nobel laureate's work in the ode form


Pablo Neruda was a master of the ode, which he conceived as an homage to just about everything that surrounded him—from an artichoke to the clouds in the sky, from the moon to his own friendship with Federico García Lorca, from the seasons to his favorite places in Chile. He was in his late forties when he committed himself to writing an ode a week and in the end produced a total of 225, which are dispersed throughout his varied oeuvre. This bilingual volume, edited by Ilan Stavans, the distinguished translator and scholar of Latin American literature, gathers all the odes together for the first time in any language. Rendered into English by an assortment of accomplished translators that includes Philip Levine, Paul Muldoon, Mark Strand, and Margaret Sayers Peden, collectively they read like the personal diary of a man in search of meaning who sings to life itself, to our connections with one another, and to the place we have in nature and the cosmos. All the Odes is a lasting statement on the role of poetry as a lightning rod during tumultuous times.

Pablo Neruda (1904-73), one of the renowned poets of the twentieth century, was born in Farral, Chile. He shared the World Peace Prize with Paul Robeson and Pablo Picasso in 1950, and he was awarded the Nobel Prize in Literature in 1971. His books include Residence on Earth, Canto General, Extravagaria, and Isla Negra.

Ilan Stavans is the Lewis-Sebring Professor in Latin American and Latino Culture at Amherst College. His books include Spanglish, On Borrowed Words, The Poetry of Pablo Neruda, and Becoming Americans. His work has been translated into a dozen languages.

“How could you not love this book? Put it by the bedside. Or by the porcelain convenience. Anywhere you find yourself alone with a minute. Flip pages to a random ode, and have a ball . . . These are direct, open, rapid, often joyful poems addressed to things of this world--onion, building, butterfly, eye, horse, washerwoman, envy, old poet, typography (yes!), Paul Robeson . . . . It's a grateful, grief-stricken, revolving-in-wonder song of life on Earth, a reminder, in short, skinny bursts, of the thrill of what's in front of us . . . By far most of the odes strike me as still vigorous. And Stavans' notes explain much that has gone forgotten . . . If you read All the Odes, you will live more alive to the living world.” —John Timpane, Philly.com with praise for Pablo Neruda

“There is no poetic work in the Spanish language as exuberant and multifarious as that of Neruda, a poetry that has touched so many different worlds and irrigated such diverse vocations and talents. The only comparable case I know in other languages is that of Victor Hugo . . . Undoubtedly, Neruda's work will endure and continue to bewitch future generations of readers the way it has bewitched ours.” —Mario Vargas Llosa with praise for Pablo Neruda

This feature require that you enable JavaScript in your browser.
END_OF_DOCUMENT_TOKEN_TO_BE_REPLACED

This feature require that you enable JavaScript in your browser.
END_OF_DOCUMENT_TOKEN_TO_BE_REPLACED

This feature require that you enable JavaScript in your browser.
END_OF_DOCUMENT_TOKEN_TO_BE_REPLACED