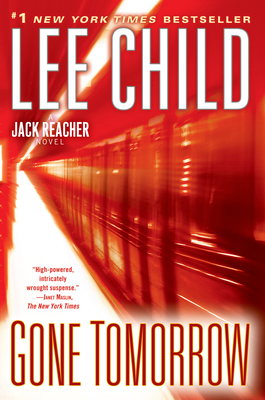 This is book number 13 in the Jack Reacher series.

New York City. Two in the morning. A subway car heading uptown. Jack Reacher, plus five other passengers. Four are okay. The fifth isn’t. And if you think Reacher isn’t going to get involved . . . then you don’t know Jack.

Susan Mark, the fifth passenger, had a big secret, and her plain little life was being watched in Washington, and California, and Afghanistan—by dozens of people with one thing in common: They’re all lying to Reacher. A little. A lot. Or just enough to get him killed. A race has begun through the streets of Manhattan, a maze crowded with violent, skilled soldiers on all sides of a shadow war. For Jack Reacher, a man who trusts no one and likes it that way, the finish line comes when you finally get face-to-face and look your worst enemy in the eye.

“Propulsive . . . [Child is] an expert at ratcheting up tension.”—Los Angeles Times

Lee Child is the author of nineteen New York Times bestselling Jack Reacher thrillers, ten of which have reached the #1 position. All have been optioned for major motion pictures; the first, Jack Reacher, was based on One Shot. Foreign rights in the Reacher series have sold in almost a hundred territories. A native of England and a former television director, Lee Child lives in New York City.

This feature require that you enable JavaScript in your browser.
END_OF_DOCUMENT_TOKEN_TO_BE_REPLACED

This feature require that you enable JavaScript in your browser.
END_OF_DOCUMENT_TOKEN_TO_BE_REPLACED

This feature require that you enable JavaScript in your browser.
END_OF_DOCUMENT_TOKEN_TO_BE_REPLACED