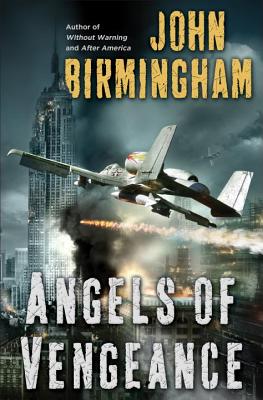 By John Birmingham
$26.00
Email or call for price.

When an inexplicable wave of energy slammed into North America, millions died. In the rest of the world, wars erupted, borders vanished, and the powerful lost their grip on power. Against this backdrop, with a conflicted U.S. president struggling to make momentous decisions in Seattle and a madman fomenting rebellion in Texas, three women are fighting their own battles—for survival, justice, and revenge.

Special agent Caitlin Monroe moves stealthily through a South American jungle. Her target: a former French official now held prisoner by a ruthless despot. To free the prisoner, Caitlin will kill anyone who gets in her way. And then she will get the truth about how a master terrorist escaped a secret detention center in French Guadeloupe to strike a fatal blow in New York City.

Sofia Peiraro is a teenage girl who witnessed firsthand the murder and mayhem of Texas under the rule of General Mad Jack Blackstone. Sofia might have tried to build a life with her father in the struggling remnants of Kansas City—if a vicious murder hadn’t set her on another course altogether: back to Texas, even to Blackstone himself.

Julianne Balwyn is a British-born aristocrat turned smuggler. Shopping in the most fashionable neighborhood of Darwin, Australia—now a fantastic neo-urban frontier—Jules has a pistol holstered in the small of her lovely back. She is playing the most dangerous game of all: waiting for the person who is hunting her to show his face—so she can kill him first.

Three women in three corners of a world plunged into electrifying chaos. Nation-states struggling for their survival. Immigrants struggling for new lives. John Birmingham’s astounding new novel—the conclusion to the series begun in Without Warning and After America—is an intense adventure that races from the halls of power to shattered streets to gleaming new cities, as humanity struggles to grasp its better angels—and purge its worst demons.

John Birmingham is the author of "After America, Without Warning, Final Impact, Designated Targets, Weapons of Choice, "and other novels, as well as "Leviathan, "which won the National Award for Nonfiction at Australia's Adelaide Festival of the Arts. He has written for "The Sydney Morning Herald, Rolling Stone, Penthouse, Playboy, "and numerous other magazines. He lives at the beach with his wife, daughter, son, and two cats.

“A real page-turner . . . [rips] the reader along on the ride.”—The San Diego Union-Tribune

This feature require that you enable JavaScript in your browser.
END_OF_DOCUMENT_TOKEN_TO_BE_REPLACED

This feature require that you enable JavaScript in your browser.
END_OF_DOCUMENT_TOKEN_TO_BE_REPLACED

This feature require that you enable JavaScript in your browser.
END_OF_DOCUMENT_TOKEN_TO_BE_REPLACED