After America (The Disappearance #2) (Mass Market) 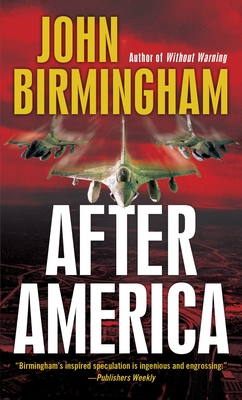 By John Birmingham
$7.99
Email or call for price

This is book number 2 in the The Disappearance series.

The world changed forever when a massive wave of energy slammed into North America and wiped out 99 percent of the population. As the United States lay in ruins, chaos erupted across the globe.

Now, while a skeleton American government tries to reconstruct the nation, swarms of pirates and foreign militias plunder the lawless wasteland where even the president is fair prey. In New York City, armies of heavily armed predators hold sway—and hold off a struggling U.S. military. In Texas, a rogue general bent on secession leads a brutal campaign against immigrants. And in England, a U.S. special ops agent enters a shadow war against a deadly enemy who has made the fight personal. While the president ponders a blitz attack on America’s once greatest city, the forces of order and anarchy wage all-out war for postapocalyptic dominance—and a handful of survivors must decide how far to go to salvage whatever uncertain future awaits . . . after America.

John Birmingham is the author of Without Warning, Final Impact, Designated Targets, Weapons of Choice, He Died with a Felafel in His Hand, The Tasmanian Babes Fiasco, How to Be a Man, The Search for Savage Henry, and Leviathan, which won the National Award for Nonfiction at Australia’s Adelaide Festival of the Arts. He has written for The Sydney Morning Herald, Rolling Stone, Penthouse, Playboy, and numerous other magazines. He lives at the beach with his wife, daughter, son, and two cats.

“John Birmingham’s ability to seamlessly merge the gritty realism of Tom Clancy with the raw speculation of Michael Crichton is like nothing else I’ve ever read.”—James Rollins, author of The Doomsday Key, on Without Warning

This feature require that you enable JavaScript in your browser.
END_OF_DOCUMENT_TOKEN_TO_BE_REPLACED

This feature require that you enable JavaScript in your browser.
END_OF_DOCUMENT_TOKEN_TO_BE_REPLACED

This feature require that you enable JavaScript in your browser.
END_OF_DOCUMENT_TOKEN_TO_BE_REPLACED