Without Warning (The Disappearance #1) (Mass Market) 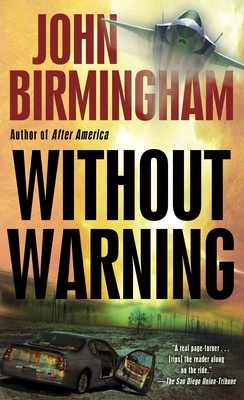 By John Birmingham
$8.99
Email or call for price

This is book number 1 in the The Disappearance series.

In Kuwait, American forces are locked and loaded for the invasion of Iraq. In Paris, a covert agent is close to cracking a terrorist cell. And just north of the equator, a sailboat manned by a drug runner and a pirate is witness to the unspeakable. In one instant, all around the world, everything will change. A wave of inexplicable energy slams into the continental United States. America as we know it vanishes. From a Texas lawyer who happens to be in the right place at the right time to an engineer in Seattle who becomes his city’s only hope, from a combat journalist trapped in the Middle East to a drug runner off the Mexican coast, Without Warning tells a fast, furious story of survival, violence, and a new, soul-shattering reality.

John Birmingham is the author of Final Impact, Designated Targets, Weapons of Choice, He Died with a Felafel in His Hand, The Tasmanian Babes Fiasco, How to Be a Man, The Search for Savage Henry, and Leviathan, which won the National Award for Nonfiction at Australia’s Adelaide Festival of the Arts. Birmingham is also the recipient of the George Munster Prize for Freelance Story of the Year and the Carlton United Sports Writing Prize. He has written for The Sydney Morning Herald, Rolling Stone, Penthouse, Playboy, and numerous other magazines. He lives at the beach with his wife, daughter, son, and two cats.

Advance praise for Without Warning

“John Birmingham’s ability to seamlessly merge the gritty realism of Tom Clancy with the raw speculation of Michael Crichton is like no other author I’ve ever read. Brilliant, nail-biting, thoughtful, and excruciatingly pertinent to our times, his latest novel, Without Warning, is simply a tour de force, a true classic in the making. It should be required reading for the entire world.”
–James Rollins, New York Times bestselling author of The Last Oracle

“What would happen if America vanished? Some would like to find out, but John Birmingham’s Without Warning suggests that the Pax Americana would soon be sorely missed. It’s a gripping story, for Americans and non-Americans alike.”
–Glenn Reynolds, InstaPundit

“Delivers all the action and techno-detail that any Clancy fan could wish for.”
–Robert Buettner, author of Orphanage

“A modern, even postmodern alternate history where the people who wish the United States would go away get what they wished for, and the consequences are meticulously, horrifically worked out in compelling detail through the eyes of a medley of interesting, well-developed characters and tightly plotted action.”
–S. M. Stirling, author of Island in the Sea of Time

This feature require that you enable JavaScript in your browser.
END_OF_DOCUMENT_TOKEN_TO_BE_REPLACED

This feature require that you enable JavaScript in your browser.
END_OF_DOCUMENT_TOKEN_TO_BE_REPLACED

This feature require that you enable JavaScript in your browser.
END_OF_DOCUMENT_TOKEN_TO_BE_REPLACED