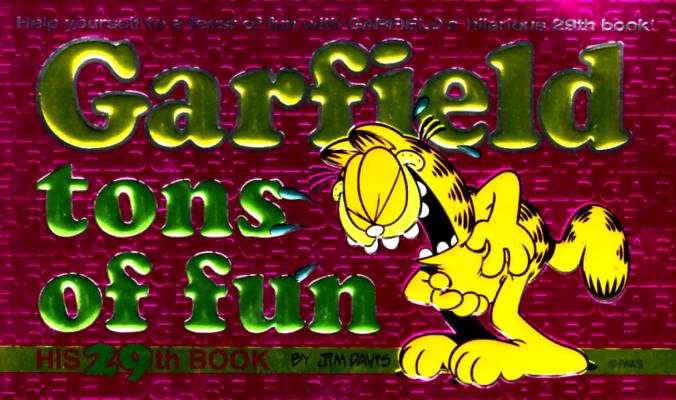 This is book number 29 in the Garfield (Numbered Paperback) series.

THERE'S MORE OF GARFIELD TO LOVE!
In his nifty new collection, GARFIELD contemplates the advantages of growing older--and fatter! Whether he's settling in for a catatonic evening of TV viewing, testing the first law of physics on his back, or just hunting burgers in the kitchen, GARFIELD is sure to go light on the action and heavy on the laughs. So grab a seat and get ready for TONS OF FUN as GARFIELD treats us to another heaping helping of humor!

Jim Davis was born on July 28, 1945, in Marion, Indiana. He later attended Ball State University in Muncie, Indiana, where he distinguished himself by earning one of the lowest cumulative grade point averages in the history of the university. (Incidentally, a fellow classmate named David Letterman earned the other). The "Garfield" strip was born on June 19, 1978, syndicated in forty-one U.S. newspapers. Today it s syndicated in more than 2,100 newspapers worldwide with more than 200 million readers, leading Guinness World Records to name "Garfield" The Most Widely Syndicated Comic Strip in the World. Davis has had many successes with "Garfield, "including four Emmy Awards for Outstanding Animated Program and induction into the Licensing Hall of Fame (1998), but his most prized awards are from his peers in the National Cartoonist Society: Best Humor Strip (1981 and 1985), the Elzie Segar Award (1990), and the coveted Reuben Award (1990) for overall excellence in cartooning."

This feature require that you enable JavaScript in your browser.
END_OF_DOCUMENT_TOKEN_TO_BE_REPLACED

This feature require that you enable JavaScript in your browser.
END_OF_DOCUMENT_TOKEN_TO_BE_REPLACED

This feature require that you enable JavaScript in your browser.
END_OF_DOCUMENT_TOKEN_TO_BE_REPLACED