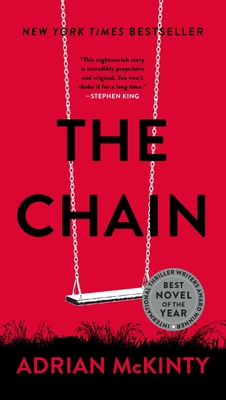 By Adrian McKinty
$7.99
Not Yet Published

When a mother is targeted by a dangerous group of masterminds, she must commit a crime to save her kidnapped daughter -- or risk losing her forever -- in this "propulsive and original" thriller (Stephen King).
It's something parents do every morning: Rachel Klein drops her daughter at the bus stop and heads into her day. But a cell phone call from an unknown number changes everything: it's a woman on the line, informing her that she has Kylie bound and gagged in her back seat, and the only way Rachel will see her again is to follow her instructions exactly: pay a ransom, and find another child to abduct. This is no ordinary kidnapping: the caller is a mother herself, whose son has been taken, and if Rachel doesn't do as she's told, the boy will die.
"You are not the first. And you will certainly not be the last." Rachel is now part of The Chain, an unending and ingenious scheme that turns victims into criminals -- and is making someone else very rich in the process. The rules are simple, the moral challenges impossible; find the money fast, find your victim, and then commit a horrible act you'd have thought yourself incapable of just twenty-four hours ago.
But what the masterminds behind The Chain know is that parents will do anything for their children. It turns out that kidnapping is only the beginning.
"McKinty is one of the most striking and most memorable crime voices to emerge on the scene in years. His plots tempt you to read at top speed, but don't give in: this writing -- sharply observant, intelligent and shot through with black humor -- should be savored."-- Tana French
"A masterpiece. You have never read anything quite like The Chain and you will never be able to forget it." -- Don Winslow
"Diabolical, unnerving, and gives a whole new meaning to the word "relentless". Adrian McKinty just leapt to the top of my list of must-read suspense novelists. He's the real deal."-- Dennis Lehane
"Pairing an irresistible concept with a winner protagonist, The Chain promises to be your new addiction once you succumb to the first enticing page."-- Alafair Burke
"A grade-A-first-rate-edge-of-your-seat thriller. I can't believe what went through my mind while reading it." -- Attica Locke

Adrian McKinty was born and grew up in Belfast, Northern Ireland during the Troubles of the 1970s and 1980s. His father was a boilermaker and ship's engineer and his mother a secretary. Adrian went to Oxford University on a full scholarship to study philosophy before emigrating to the United States to become a high school English teacher. His debut crime novel Dead I Well May Be was shortlisted for the 2004 Dagger Award and was optioned by Universal Pictures. His books have won the Edgar Award, the Ned Kelly Award, the Anthony Award, and the Barry Award and have been translated into over twenty languages. Adrian is a reviewer and critic for the Sydney Morning Herald, the Irish Times, and the Guardian. He lives in New York City with his wife and two children.

This feature require that you enable JavaScript in your browser.
END_OF_DOCUMENT_TOKEN_TO_BE_REPLACED

This feature require that you enable JavaScript in your browser.
END_OF_DOCUMENT_TOKEN_TO_BE_REPLACED

This feature require that you enable JavaScript in your browser.
END_OF_DOCUMENT_TOKEN_TO_BE_REPLACED