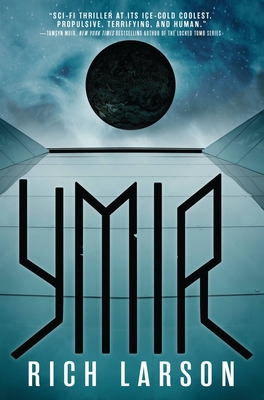 By Rich Larson
$17.99
Unavailable
Not Yet Published

This is book number 2 in the The Violet Wars series.

A gripping, far-future retelling of Beowulf from an award-winning author, perfect for fans of Richard K. Morgan Yorick never wanted to see his homeworld again. He left Ymir two decades ago, with half his face blown off and no love lost for the place. But when his employer's mines are threatened by a vicious alien machine, Yorick is shipped back home to hunt it.

All he wants is to do his job and get out. Instead, Yorick is pulled into a revolution brewing beneath Ymir's frozen surface, led by the very last person he wanted to see again -- the brother who sent him off in pieces twenty years ago.

Rich Larson was born in Galmi, Niger, has lived in Spain and Czech Republic, and currently writes from Grande Prairie, Canada. He is the author of the novels Ymir and Annex, as well as over 150 short stories -- some the best of which can be found in the collection Tomorrow Factory.

Find free reads and support his work at patreon.com/richlarson.

"An exciting twist on a hostile-alien-takeover drama... This exhilarating tale hurtles briskly to its heartfelt conclusion."—Washington Post on Annex

"Rich Larson has an amazing knack for capturing the lonesomeness of growing up, and how much random cruelty and steadfast companionship there is in childhood. Not to mention, just how alien and scary families can be."—Charlie Jane Anders on Annex

"A thrilling and imaginative entry into the alien invasion genre with two fierce and desperate young protagonists you won't be able to stop rooting for."—Fonda Lee, World Fantasy Award-winning author of Jade City on Annex

"Rich Larson presents a uniquely compelling apocalypse--equal parts frightening and touching."—Alex White, author of A Big Ship at the Edge of the Universe on Annex

"Annex is a ferocious sci-fi fairy tale--a warm, thrilling adventure about what happens after the end of the world. Both epic and intimate in equal measure, this one's a joy and a blast, from beginning to end."—Cherie Priest, author of Boneshaker and I Am Princess X on Annex

"Annex's combination of a likable and diverse cast of characters with breakneck, engaging action-all against the background of an evocative and sinister world-make it an accomplished and impressive debut."—Booklist

"Larson's breakneck pace end up making [Annex] exhilarating, and well worth waiting for the next volume."—Locus

This feature require that you enable JavaScript in your browser.
END_OF_DOCUMENT_TOKEN_TO_BE_REPLACED

This feature require that you enable JavaScript in your browser.
END_OF_DOCUMENT_TOKEN_TO_BE_REPLACED

This feature require that you enable JavaScript in your browser.
END_OF_DOCUMENT_TOKEN_TO_BE_REPLACED