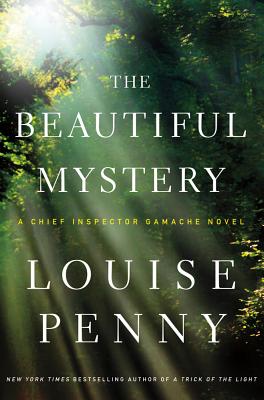 This is book number 8 in the Chief Inspector Gamache Novel series.

“In the eighth mystery in this popular series, Chief Inspector Gamache finds himself investigating a murder in a remote abbey in the wilds of the Canadian forest. The only clue appears to involve an ancient form of church music, the very earliest Gregorian chant. As usual, Penny's complex characters and their multidimensional relationships, as well as the unusual setting, make this a fascinating reading experience. Each book in the series is better than the one before.”
— Anne McMahon, Boswell Book Company, Milwaukee, WI

The brilliant new novel in the New York Times bestselling series by Louise Penny, one of the most acclaimed crime writers of our time

No outsiders are ever admitted to the monastery of Saint-Gilbert-Entre-les-Loups, hidden deep in the wilderness of Quebec, where two dozen cloistered monks live in peace and prayer. They grow vegetables, they tend chickens, they make chocolate. And they sing. Ironically, for a community that has taken a vow of silence, the monks have become world-famous for their glorious voices, raised in ancient chants whose effect on both singer and listener is so profound it is known as "the beautiful mystery."

But when the renowned choir director is murdered, the lock on the monastery's massive wooden door is drawn back to admit Chief Inspector Armand Gamache and Jean-Guy Beauvoir of the Sûreté du Québec. There they discover disquiet beneath the silence, discord in the apparent harmony. One of the brothers, in this life of prayer and contemplation, has been contemplating murder. As the peace of the monastery crumbles, Gamache is forced to confront some of his own demons, as well as those roaming the remote corridors. Before finding the killer, before restoring peace, the Chief must first consider the divine, the human, and the cracks in between.

LOUISE PENNY is the author of the #1 New York Times and Globe and Mail bestselling series of Chief Inspector Armand Gamache novels. She has won numerous awards, including a CWA Dagger and the Agatha Award (six times), and was a finalist for the Edgar Award for Best Novel. In 2017, she received the Order of Canada for her contributions to Canadian culture. Louise lives in a small village south of Montréal.

“With enormous empathy for the troubled human soul--and an ending that makes your blood race and your heart break--Penny continues to raise the bar of her splendid series.” —People Magazine (4 out 4 stars)

“Louise Penny has crafted an almost perfect crime—haunting, puzzling, brilliant and indeed a most beautiful mystery. Chief Inspector Gamache is one of my favorite characters in fiction. Here he must penetrate a cloistered monastery deep in the northern woods of Quebec, where a murdered monk is his ticket to get in. This is a tour-de-force for Penny, and a thrilling, intelligent read.” —Linda Fairstein

“A. Ma. Zing!  A remarkably courageous—and very beautiful—book that leaps the abyss between faith and despair.” —Diana Gabaldon

“Elliptical and often oracular… also remarkably penetrating and humane. The most illuminating analogies are not to other contemporary detective fiction but to The Name of the Rose and Murder in the Cathedral.” —Kirkus Reviews

“An entire mystery novel centering on Gregorian chants (whose curiously hypnotic allure is called the "beautiful mystery")? Yes, indeed, and in the hands of the masterful Penny, the topic proves every bit as able to transfix readers as the chants do their listeners.” —Booklist (starred review)

“Traditional mystery fans can look forward to a captivating whodunit plot, a clever fair-play clue concealed in plain view, and the deft use of humor to lighten the story's dark patches. On a deeper level, the crime provides a means for Penny's unusually empathic, all-too-fallible lead to unearth truths about human passions and weaknesses while avoiding simple answers.” —Publishers Weekly (starred review)

This feature require that you enable JavaScript in your browser.
END_OF_DOCUMENT_TOKEN_TO_BE_REPLACED

This feature require that you enable JavaScript in your browser.
END_OF_DOCUMENT_TOKEN_TO_BE_REPLACED

This feature require that you enable JavaScript in your browser.
END_OF_DOCUMENT_TOKEN_TO_BE_REPLACED