The Lost Whale: The True Story of an Orca Named Luna (Hardcover) 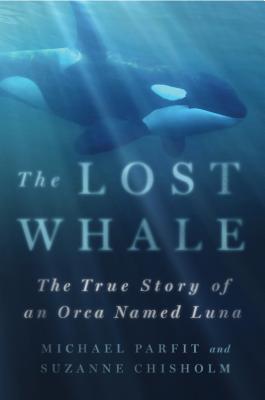 The heartbreaking and true story of a lonely orca named Luna who befriended humans in Nootka Sound, off the coast of Vancouver Island by Michael Parfit and Suzanne Chisholm.

One summer in Nootka Sound on the west coast of Vancouver Island, British Columbia, a young killer whale called Luna got separated from his pod. Like humans, orcas are highly social and depend on their families, but Luna found himself desperately alone. So he tried to make contact with people. He begged for attention at boats and docks. He looked soulfully into people's eyes. He wanted to have his tongue rubbed. When someone whistled at him, he squeaked and whistled back. People fell in love with him, but the government decided that being friendly with Luna was bad for him, and tried to keep him away from humans. Policemen arrested people for rubbing Luna's nose. Fines were levied. Undaunted, Luna refused to give up his search for connection and people went out to meet him, like smugglers carrying friendship through the dark. But does friendship work between species? People who loved Luna couldn't agree on how to help him. Conflict came to Nootka Sound. The government built a huge net. The First Nations' members brought out their canoes. Nothing went as planned, and the ensuing events caught everyone by surprise and challenged the very nature of that special and mysterious bond we humans call friendship. The Lost Whale celebrates the life of a smart, friendly, determined, transcendent being from the sea who appeared among us like a promise out of the blue: that the greatest secrets in life are still to be discovered.

MICHAEL PARFIT is a British Columbia-based writer, journalist and filmmaker. With his wife, Suzanne Chisholm, Michael produced and directed more than twenty stories for the National Geographic Channel, and they are the authors of The Lost Whale. He lives in Sidney, British Columbia, Canada.

SUZANNE CHISHOLM has produced and filmed documentaries and has done more than a dozen pieces for the National Geographic Today Show. She is the author of The Lost Whale. She also lives in Sidney, British Columbia, Canada.

“I loved The Lost Whale. It's an important book, but also funny and moving and unforgettable.” —Ric O'Barry, star of the Academy Award winning film The Cove and author of Behind the Dolphin Smile

“I first fell in love with Luna when I saw The Whale in 2011, and the bond is even stronger after reading The Lost Whale, the compelling story-behind-the-story of the beautifully filmed documentary. And though I consider Michael Parfit and Suzanne Chisholm to be friends and colleagues, I feel no conflict of interest in stating they are journalists, filmmakers, and now authors of the highest order. In short, they are master storytellers. Let them tell you the beguiling story of Luna, the lost whale. You will never forget it as long as you live. I guarantee it.” —David Kirby, author of Death at SeaWorld and Animal Factory

“The Lost Whale is an epic story that has it all - drama, controversy, humor, emotion, humans you care about, and an orca named Luna you will never forget. This wonderful book clearly shows how empathy and compassion easily cross species lines. It reminds us that we all need someone we can lean on. Read this book and share Luna's story as widely as possible. It is that special and important.” —Marc Bekoff, author of The Emotional Lives of Animals and editor of Ignoring Nature No More

“The story of Luna is about mystery, empathy, and friendship, and The Lost Whale is as engrossing as a novel. You have to read it. It's an unforgettable story.” —Ken Balcomb, Chief Scientist, Center for Whale Research

“The Lost Whale recounts an incredible, complex and heart-wrenching story, a drama of science, ethics, politics and emotion from which no reader can remain impassive. Ultimately, the question at the heart of The Lost Whale explores the nature of empathy. That question, and so many others raised by this book, will stay with me for a long time. This book is a fitting tribute to the whale called Luna, and to all the people who cared so deeply for his well-being.” —Eva Saulitis, author of Into Great Silence: A Memoir of Discovery and Loss in the Realm of Vanishing Orcas

“Luna's story brings a thorny dilemma to the table--what should humanity's role toward nature be?--and the book does a surprisingly good job of showing the range of emotions behind that question.” —Publishers Weekly

“A tender, nail-biting account of an orca's fate.” —Kirkus Reviews

This feature require that you enable JavaScript in your browser.
END_OF_DOCUMENT_TOKEN_TO_BE_REPLACED

This feature require that you enable JavaScript in your browser.
END_OF_DOCUMENT_TOKEN_TO_BE_REPLACED

This feature require that you enable JavaScript in your browser.
END_OF_DOCUMENT_TOKEN_TO_BE_REPLACED