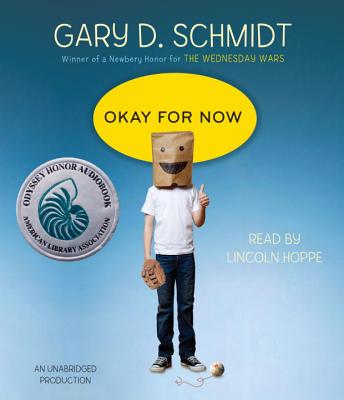 “Following The Wednesday Wars, Doug Swieteck returns as he and his family move to 'stupid' Marysville in upstate New York. Completely awed by his hero, Yankee baseball player Joe Pepitone, and trying valiantly to be nothing like his abusive, often drunken father, Doug has more than his share of obstacles. It's 1968: Doug's brother is in Vietnam, the Apollo 11 moonwalk is nearing, and Doug is hiding two big secrets. Phenomenal characters and impossible odds make this tale of an amazing young man funny, tender, and inspiring.”
— Jane Morck, Third Place Books, Lake Forest Park, WA

“The Dump” is what Doug Swieteck calls his new home in upstate New York. He lands there in the summer of 1968, when the Apollo space missions are under way, Joe Pepitone is slugging for the New York Yankees, and the Vietnam War is raging. At home he lives with a father who has lost his way and a brother accused of robbery. And Doug’s oldest brother is returning from Vietnam. Who knows what wounds his missions have given him?

But Doug has his own mission, too, and it begins when he first sees the plates of John James Audubon’s Birds of America at the local library. His mission will lead him to Lil Spicer, who shows him how to drink a really cold Coke, to Mrs. Windermere, who drags him to a theater opening, and to the customers of his Saturday grocery deliveries, who together will open a world as strange to him as the lunar landscape.

Swieteck, who first appeared in Gary D. Schmidt’s Newbery Honor book The Wednesday Wars, will discover the transforming power of art over disaster in a story about creativity and loss, love and recovery, and survival.

Gary D. Schmidt is the author of Lizzie Bright and the Buckminster Boy, which won both Newbery and Printz Honors, and The Wednesday Wars, winner of a Newbery Honor. Schmidt teaches writing in the English Department of Calvin College in Grand Rapids, Michigan, and in the MFA Writing for Children program at Hamline University, St. Paul, Minnesota.

This feature require that you enable JavaScript in your browser.
END_OF_DOCUMENT_TOKEN_TO_BE_REPLACED

This feature require that you enable JavaScript in your browser.
END_OF_DOCUMENT_TOKEN_TO_BE_REPLACED

This feature require that you enable JavaScript in your browser.
END_OF_DOCUMENT_TOKEN_TO_BE_REPLACED