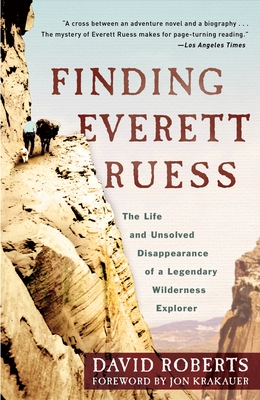 The definitive biography of Everett Ruess, the artist, writer, and eloquent celebrator of the wilderness whose bold solo explorations of the American West and mysterious disappearance in the Utah desert at age twenty have earned him a large and devoted cult following.

“Easily one of [Roberts’s] best . . . thoughtful and passionate . . . a compelling portrait of the Ruess myth.”—Outside

Wandering alone with burros and pack horses through California and the Southwest for five years in the early 1930s, on voyages lasting as long as ten months, Ruess became friends with photographers Edward Weston and Dorothea Lange, swapped prints with Ansel Adams, took part in a Hopi ceremony, learned to speak Navajo, and was among the first "outsiders" to venture deeply into what was then (and to some extent still is) largely a little-known wilderness. When he vanished without a trace in November 1934, Ruess left behind thousands of pages of journals, letters, and poems, as well as more than a hundred watercolor paintings and blockprint engravings.

Everett Ruess is hailed as a paragon of solo exploration, while the mystery of his death remains one of the greatest riddles in the annals of American adventure. David Roberts began probing the life and death of Everett Ruess for National Geographic Adventure magazine in 1998. Finding Everett Ruess is the result of his personal journeys into the remote areas explored by Ruess, his interviews with oldtimers who encountered the young vagabond and with Ruess’s closest living relatives, and his deep immersion in Ruess’s writings and artwork. More than seventy-five years after his vanishing, Ruess stirs the kinds of passion and speculation accorded such legendary doomed American adventurers as Into the Wild’s Chris McCandless and Amelia Earhart.

“An irresistible read . . . a remarkable book . . . Roberts makes the mystery of Ruess’s evanescent existence more compelling than ever.”—Jon Krakauer, from the foreword

“Everett Lives! If not in a desert canyon, then at least among the pages where David Roberts brings the young man’s life and legend all together: his writings and art, his kinship with nature, his love for adventure and beauty, and the yet-evolving mystery of his disappearance. Count me one among many inspired by a young adventurer who lived in beauty and left us too soon. May we never stop wandering.”—Aron Ralston, author of Between a Rock and a Hard Place and subject of the film 127 Hours

“Anyone intrigued by the Ruess phenomenon will be enthralled with Roberts’ review of the young man’s biography, the stature of his artistic achievements and unrealized potential, and efforts to find and eventually memorialize him. . . . This is sure to appeal to fans of wilderness wanderers.”—Booklist

“Absorbing . . . [a] readable look at a complex personality in wilderness exploration.”—Kirkus Reviews

“Roberts deftly . . . captures the complexity of his subject.”—Publishers Weekly

This feature require that you enable JavaScript in your browser.
END_OF_DOCUMENT_TOKEN_TO_BE_REPLACED

This feature require that you enable JavaScript in your browser.
END_OF_DOCUMENT_TOKEN_TO_BE_REPLACED

This feature require that you enable JavaScript in your browser.
END_OF_DOCUMENT_TOKEN_TO_BE_REPLACED