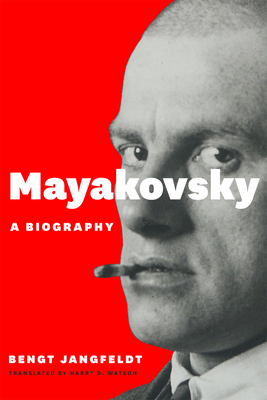 Few poets have led lives as tempestuous as that of Vladimir Mayakovsky. Born in 1893 and dead by his own hand in 1930, Mayakovsky packed his thirty-six years with drama, politics, passion, and—most important—poetry. An enthusiastic supporter of the Russian Revolution and the emerging Soviet State, Mayakovsky was championed by Stalin after his death and enshrined as a quasi-official Soviet poet, a position that led to undeserved neglect among Western literary scholars even as his influence on other poets has remained powerful.

With Mayakovsky, Bengt Jangfeldt offers the first comprehensive biography of Mayakovsky, revealing a troubled man who was more dreamer than revolutionary, more political romantic than hardened Communist. Jangfeldt sets Mayakovsky’s life and works against the dramatic turbulence of his times, from the aesthetic innovations of the pre-revolutionary avant-garde to the rigidity of Socialist Realism and the destruction of World War I to the violence—and hope—of the Russian Revolution, through the tightening grip of Stalinist terror and the growing disillusion with Russian communism that eventually led the poet to take his life.

Through it all is threaded Mayakovsky’s celebrated love affair with Lili Brik and the moving relationship with Lili’s husband, Osip, along with a brilliant depiction of the larger circle of writers and artists around Mayakovsky, including Maxim Gorky, Viktor Shklovsky, Alexander Rodchenko, and Roman Jakobson. The result is a literary life viewed in the round, enabling us to understand the personal and historical furies that drove Mayakovsky and generated his still-startling poetry.

Illustrated throughout with rare images of key characters and locations, Mayakovsky is a major step in the revitalization of a crucial figure of the twentieth-century avant-garde.

Bengt Jangfeldt is a Swedish author and researcher. He is the author of several books, including The Hero of Budapest: The Triumph and Tragedy of Raoul Wallenberg.

Harry D. Watson is an author and translator who lives in Scotland.

"A gripping account of the poet's tumultuous life and tragic death."
— New York Review of Books

"Jangfeldt carefully shows the way in which all aspects of Mayakovsky's life--his womanizing, his astonishing productivity, his chain-smoking, his gambling, his poetry--came from the same source. In Jangfeldt's concentration on how Mayakovsky's art and life were absolutely and inextricably intertwined, the granite Soviet figure is made into something more akin to a butch Russian Oscar Wilde, and is all the more interesting for the metamorphosis. . . . Mayakovsky is also a beautifully coordinated group portrait of the individuals surrounding Mayakovsky. . . . This is a wonderful book that presents us with a captivating, contradictory, frustrating human being."
— Literary Review

"Vladimir Mayakovsky, a forester’s son from the Caucasus, became the leading Russian avant-garde poet of the pre-World War I years, a prophet of the 1917 Revolution, the author of a long poem on Lenin, and then an increasingly disillusioned--though still firmly 'Communist'--poet, agitator, dramatist, and film maker in the Soviet Union of the 1920s. A dazzling lyric poet who never quite grew up, he tragically committed suicide in 1930 at the age of 36. Bengt Jangfeldt prize-winning Mayakovsky, first published in Sweden, gives a beautifully detailed portrait of the period as well as the individual life, especially of Mayakovsky's passionate and tormented relationship with Lili Brik, herself a leading figure of the period. Jangfeldt's absorbing story is full of surprises: it lays to rest many common assumptions about everyday life under Soviet rule even as it underscores others. A real page turner, copiously illustrated and well translated, this biography is essential reading not only for students of modernist poetry but for anyone interested in the relationship of literature to life in the former Soviet Union."
— Marjorie Perloff

"Jangfeldt paints a fine picture of, especially, the fascinating Lili, as well as Mayakovsky. Parts are underplayed: there is frequent mention of Mayakovsky's suicidal disposition, but fairly little exploration of it in any detail, from what lay behind it to what exacerbated it. But the man, and the most significant works, are well introduced. . . . A very impressive study of a remarkable poet, and a rather remarkable group of people--a who's who of Russian literature of the times. Mayakovsky is also an exceptionally well (and helpfully) illustrated biography."
— The Complete Review

"This will of course become a standard work, not only as the first non-Soviet biography of Mayakovsky but because of Jangfeldt’s exclusive access to sources. For more than three decades he has had intimate contacts with people from the poet's circle. The richness of detail in the captivating tale we now have access to is a result of his important private archive."
— Aftenbladet

"Let it be said immediately: this biography is a masterpiece. It is the kind of monumental, deeply penetrating life survey that is written once in ten years, at most."
— Dagens Nyheter

"This is a groundbreaking, resplendent biography."
— Arete

This feature require that you enable JavaScript in your browser.
END_OF_DOCUMENT_TOKEN_TO_BE_REPLACED

This feature require that you enable JavaScript in your browser.
END_OF_DOCUMENT_TOKEN_TO_BE_REPLACED

This feature require that you enable JavaScript in your browser.
END_OF_DOCUMENT_TOKEN_TO_BE_REPLACED