The Ruin: A Novel (A Cormac Reilly Mystery #1) (Paperback) 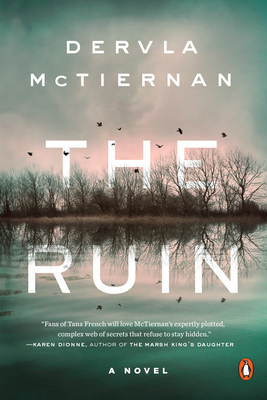 By Dervla McTiernan
$17.00
Email or call for price

This is book number 1 in the A Cormac Reilly Mystery series.

“In a thrilling debut police procedural, Dervla McTiernan's The Ruin introduces readers to honest and likeable Cormac Reilly, a 20 year veteran detective recently relocated to Galway, Ireland trying to figure out where he fits in at his new police station. Tasked with closing cold case files, Reilly's investigation of a case from his rookie days soon intersects with the current case of an apparent suicide that proves to be much more than it appears. With a detailed setting that allows visualization of the unfolding plot, McTiernan has introduced readers to a mystery that has intriguing characters and tense, suspenseful plot twists The Ruin will compel readers to keep turning the pages until they reach the satisfying conclusion that will leave them impatiently waiting for the next installment in this promising series.”
— Betsy Von Kerens, The Bookworm, ,

“This solid debut from Irish author Dervla McTiernan, a compelling story that spans two decades and multiple mysteries, examines the ways that public servants can provide resources for those in need or fail them utterly—or worse. But the core element that won my praise was McTiernan’s constant reminder of the fact that characters’ deaths leave holes in the other characters’ lives; they are not just plot devices to drive a whodunnit, but individuals who are mourned.”
— Maryelizabeth Yturralde, Mysterious Galaxy Books, San Diego, CA

“Compelling, unexpected twists and a hold-your breath standoff . . . Hand this one to readers of Tana French and to police-procedural fans.” —Booklist

It's been twenty years since Detective Cormac Reilly discovered the body of Hilaria Blake in her crumbling home. But he's never forgotten the two children she left behind...

When Aisling Conroy's boyfriend Jack is found in the freezing black waters of the river Corrib in Ireland, the police tell her it was suicide. She throws herself into work, trying to forget—but Jack's sister Maude reappears in Ireland after years abroad, determined to prove Jack was murdered.

Meanwhile, Detective Cormac Reilly, who was recently transferred to Galway from his squad in Dublin, is assigned to dig into a cold case from twenty years ago—the seeming overdose of Jack and Maude's drug and alcohol addled mother. Other detectives are connecting Jack’s death to his mother’s, and pushing Reilly to arrest Maude, and fast. But instinct tells him something isn’t quite what it seems…

This unsettling small-town noir draws us deep into the dark heart of Ireland, where corruption, desperation, and crime run rife. A gritty look at trust and betrayal where the written law isn't the only one, The Ruin asks who will protect you when the authorities can't—or won't.

Dervla McTiernan: the international #1 bestseller Dervla McTiernan’s first two novels, The Rúin and The Scholar, were critically acclaimed around the world. Dervla has won multiple prizes, including a Ned Kelly Award, Davitt Awards, a Barry Award and an International Thriller Writers Award, and has been shortlisted for numerous others. Dervla’s third book, The Good Turn, went straight to #1 in the bestseller charts, confirming her place as one of Australia’s best and most popular crime writers. Her latest novel is The Murder Rule.

Shortlisted for The Guardian's Not the Booker Prize 2018
Named one of LitHub's Most Anticipated Crime, Mystery, and Thrillers of Summer 2018

“Addictive . . . The Ruin, set in Ireland, follows detective Cormac Reilly as he reopens an investigation from twenty years ago. He’s determined to connect Hilaria Blake’s overdose in the past to her son Jack’s recent death. Get invested now, because there are at least two more Cormac Reilly books coming in the future.”
—HelloGiggles

“A gripping mystery set in Galway that spans twenty years. It’s a complicated page-turning story that touches on corruption, clandestine cover-ups, and criminal conspiracy. . . . A story that’s as moving as it is fast-paced.”
—Daily Mail (London)

“This searing debut brings together procedural and psychological thriller for a fascinating portrait of small-town Ireland and its big-city problems. Addiction, suicide, corruption, and desperation all play their part in this intricate, unsettling noir. Ireland’s experiencing an incredible new wave of women crime writers, spearheaded by the indomitable Tana French, and Dervla McTiernan is a fine new addition to a growing scene.”
—Lit Hub

“Dervla McTiernan’s deliciously complicated police procedural The Ruin begins when a young man jumps to his death from a bridge in Galway, Ireland—or does he? His girlfriend doesn’t think Jack took his life, and neither does the detective who knew him from another case twenty years earlier. But the harder they dig for answers, the farther the truth recedes, and the more complicated and dangerous their investigation becomes. Fans of Tana French will love McTiernan’s expertly plotted, complex web of secrets that refuse to stay hidden.”
—Karen Dionne, author of The Marsh King’s Daughter

“The Ruin is dark and compelling, with the satisfaction of a police procedural and the atmosphere of a gothic mystery. I was gripped by it, and by the complicated, resourceful characters of Aisling and Maude.”
—Flynn Berry, author of Under the Harrow

“Powerful . . . McTiernan neatly ties [the threads of the novel] all together in the suspenseful conclusion. McTiernan, born in Ireland but now living in Australia, is a writer to watch.”
—Publishers Weekly (starred review)

This feature require that you enable JavaScript in your browser.
END_OF_DOCUMENT_TOKEN_TO_BE_REPLACED

This feature require that you enable JavaScript in your browser.
END_OF_DOCUMENT_TOKEN_TO_BE_REPLACED

This feature require that you enable JavaScript in your browser.
END_OF_DOCUMENT_TOKEN_TO_BE_REPLACED