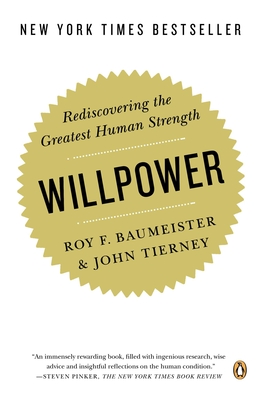 One of the world's most esteemed and influential psychologists, Roy F. Baumeister, teams with New York Times science writer John Tierney to reveal the secrets of self-control and how to master it.

"Deep and provocative analysis of people's battle with temptation and masterful insights into understanding willpower: why we have it, why we don't, and how to build it. A terrific read." —Ravi Dhar, Yale School of Management, Director of Center for Customer Insights

Pioneering research psychologist Roy F. Baumeister collaborates with New York Times science writer John Tierney to revolutionize our understanding of the most coveted human virtue: self-control. Drawing on cutting-edge research and the wisdom of real-life experts, Willpower shares lessons on how to focus our strength, resist temptation, and redirect our lives. It shows readers how to be realistic when setting goals, monitor their progress, and how to keep faith when they falter. By blending practical wisdom with the best of recent research science, Willpower makes it clear that whatever we seek—from happiness to good health to financial security—we won’t reach our goals without first learning to harness self-control.

ROY F. BAUMEISTER directs the social psychology program at Florida State University. He has written more than 450 scientific publications and consistently ranks among the world’s most frequently cited psychologists.

JOHN TIERNEY writes the “Findings” science column for the New York Times. His writing has won awards from the American Association for the Advancement of Science and the American Institute of Physics. This is his third book.

"The psychologist Roy F. Baumeister has shown that the force metaphor has a kernel of neurobiological reality. In Willpower, he has teamed up with the irreverent New York Timesscience columnist John Tierney to explain this ingenious research and show how it can enhance our lives. . . . Willpower is an immensely rewarding book, filled with ingenious research, wise advice and insightful reflections on the human condition." —Steven Pinker, The New York Times Book Review

"An accessible, empirically grounded guide to willpower and how best to deploy it to overcome temptation." —The Wall Street Journal

"Willpower is sure to inspire further groundbreaking research into the mechanics of willpower. One implication is already apparent. Since repeated behaviors eventually turn into habits, improving willpower long term requires a unique strategy-a habit of changing habits, of continually expanding our zones of comfort. One such practice, it seems, is the 'routine' of learning. That's a habit that this brilliant book will certainly nourish." —The Daily Beast

"Baumeister and Tierney use their appealingly upbeat voice to explain the intricate call-and-response between the failure of self-control and its problematical results." —Kirkus Reviews

"Willpower affects almost every aspect of our lives. From procrastination, to saving for retirement to exercising, Tierney and Baumeister have given us a wonderful book in which they not only share fascinating research on the subject but also provide simple tricks to help us tap into this important quality." —Dan Ariely, Duke University, author of Predictably Irrational

"Willpower is sinfully delicious—once you start reading, you won't be able to stop. A fascinating account of the exciting new science of self-control, told by the scientist who made it happen and the journalist who made it news." —Daniel Gilbert, Harvard University, author of Stumbling on Happiness

"Who knew that a book about such a daunting topic could be as wonderfully entertaining as it is enlightening! Tierney and Baumeister have produced a highly intelligent work full of fascinating information (and great advice) about a core element of modern living. Bravo." —David Allen, author of Getting Things Done and Making It Work

"Will, willpower, and mental energy have been shunned by modern psychology. Roy Baumeister, the most distinguished experimental social psychologist in the world, and John Tierney, a renowned journalist, have teamed up to put Will back into its rightful center stage place. This little masterpiece is a must read for all of us who want to exercise, diet, manage our time, be thrifty, and resist temptation." —Martin Seligman, former president of American Psychological Association

"This is a manual from heaven for anyone who has ever wanted to lose weight, stop smoking, drink less, work more efficiently and more intelligently. An astonishingly good - and accessible - inquiry into one of the more elusive areas of human psychology: why we go on thwarting ourselves when we really know better. On top of that, Willpower is a vastly entertaining book, full of fascinating stories about the complexities of our evolutionarily-wired brains. A brilliant accomplishment, at every level." —Christopher Buckley, author of Thank You for Smoking

"Deep and provocative analysis of people's battle with temptation and masterful insights into understanding willpower: why we have it, why we don't, and how to build it. A terrific read." —Ravi Dhar, Yale School of Management, Director of Center for Customer Insights

This feature require that you enable JavaScript in your browser.
END_OF_DOCUMENT_TOKEN_TO_BE_REPLACED

This feature require that you enable JavaScript in your browser.
END_OF_DOCUMENT_TOKEN_TO_BE_REPLACED

This feature require that you enable JavaScript in your browser.
END_OF_DOCUMENT_TOKEN_TO_BE_REPLACED