It Ain't All for Nothin' (Paperback) 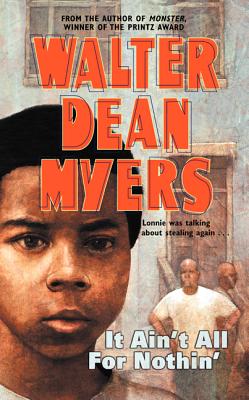 By Walter Dean Myers
$7.99
Email or call for price

Life in Harlem isn't easy, but Tippy and his grandmother are doing okay. Then Grandma Carrie gets sick, and Tippy goes to live with Lonnie, his father. Lonnie's got his own thing going on, and he doesn't have much room in his life for a son he barely knows -- unless, that is, Tippy is willing to walk the far side of the fine line between right and wrong. Grandma Carrie always said if he had Jesus in his heart there wasn't anything to worry about, but sometimes it's not that simple. When the chips are down, will Tippy be able to call for help -- and is there anyone out there who will listen?

Walter Dean Myers was the New York Times bestselling author of Monster, the winner of the first Michael L. Printz Award; a former National Ambassador for Young People's Literature; and an inaugural NYC Literary Honoree. Myers received every single major award in the field of children's literature. He was the author of two Newbery Honor Books and six Coretta Scott King Awardees. He was the recipient of the Margaret A. Edwards Award for lifetime achievement in writing for young adults, a three-time National Book Award Finalist, as well as the first-ever recipient of the Coretta Scott King-Virginia Hamilton Award for Lifetime Achievement.

This feature require that you enable JavaScript in your browser.
END_OF_DOCUMENT_TOKEN_TO_BE_REPLACED

This feature require that you enable JavaScript in your browser.
END_OF_DOCUMENT_TOKEN_TO_BE_REPLACED

This feature require that you enable JavaScript in your browser.
END_OF_DOCUMENT_TOKEN_TO_BE_REPLACED