The Adventurer's Son: A Memoir (Hardcover) 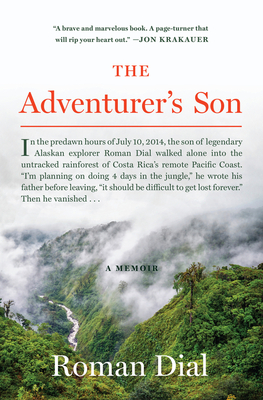 Hailed as "gripping" (New York Times) and "beautiful" (Washington Post), The Adventurer's Son is Roman Dial’s extraordinary and widely acclaimed account of his two-year quest to unravel the mystery of his son’s disappearance in the jungles of Costa Rica.

In the predawn hours of July 10, 2014, the twenty-seven-year-old son of preeminent Alaskan scientist and National Geographic Explorer Roman Dial, walked alone into Corcovado National Park, an untracked rainforest along Costa Rica’s remote Pacific Coast that shelters miners, poachers, and drug smugglers. He carried a light backpack and machete. Before he left, Cody Roman Dial emailed his father: “I am not sure how long it will take me, but I’m planning on doing 4 days in the jungle and a day to walk out. I’ll be bounded by a trail to the west and the coast everywhere else, so it should be difficult to get lost forever.”

They were the last words Dial received from his son.

As soon as he realized Cody Roman’s return date had passed, Dial set off for Costa Rica. As he trekked through the dense jungle, interviewing locals and searching for clues—the authorities suspected murder—the desperate father was forced to confront the deepest questions about himself and his own role in the events. Roman had raised his son to be fearless, to be at home in earth’s wildest places, travelling together through rugged Alaska to remote Borneo and Bhutan. Was he responsible for his son’s fate? Or, as he hoped, was Cody Roman safe and using his wilderness skills on a solo adventure from which he would emerge at any moment?

Part detective story set in the most beautiful yet dangerous reaches of the planet, The Adventurer’s Son emerges as a far deeper tale of discovery—a journey to understand the truth about those we love the most.

Once called America’s most imaginative adventurer, Roman Dial is a pioneering outdoorsman based in Alaska, where he's made full-length traverses by foot, ski, pedal, and paddle of the Brooks and Alaska Ranges. He is a professor of mathematics and biology at Alaska Pacific University in Anchorage. The Adventurer’s Son—a best-selling memoir about the two-year search for his missing son—is published by William Morrow (2020).

"Gripping and unnerving. ... This is what it means to raise a child, to introduce that child to the world, and to bet his life — and his joy — on the odds." — New York Times Book Review (Editor's Choice)

"The literature of wilderness exploration is as much about mortal risk as anything else. From Jack London to Jon Krakauer, adventure writing shows us how the rich rewards of interacting with thrillingly raw nature coexist with the simple fact that we tempt fate – and a lonely death – whenever we step from the safely beaten path into the wild. Underscoring this dangerous bargain, The Adventurer’s Son, takes its place among modern accounts of tragic adventure with hard-won wisdom and grace. ... Dial pays worthy tribute to his son with this deeply felt saga." — USA Today ("Best Books of 2020 So Far")

“The Adventurer’s Son is energized by spectacular descriptions of nature and by the narrative action of a father’s fight to find a beloved son. But it is its universality, this question of how to live and why, of how to understand nature, that gives it resonance and beauty."
— Christian Science Monitor (A Best Book of the Month)

“Roman Dial has written a brave and marvelous book. It’s a page-turner that will rip your heart out.” — JON KRAKAUER, author of Into the Wild

"The best adventure writers are seekers, traversing not only physical terrain but their emotional depths. These stakes are raised to new heights by The Adventurer’s Son, a wrenching memoir by Alaskan explorer Roman Dial. ... Moving. ... A brave narrative."    — Rinker Buck, Wall Street Journal

"Much more than a simple mystery. ... A moving portrait of an inspired young man and a firsthand account of a father’s desperate hunt for his missing son." — Men's Journal

"Roman Dial is a pioneering legend of deep adventure. ... In this riveting account of a family's search for answers, Dial shares a thought-provoking investigation of what it means to embrace life's wild adventures." — Adventure Journal (Recommended Reading)

“A haunting, beautifully-crafted narrative by one of the renowned wilderness explorers of our time. Above all else, The Adventurer’s Son is a sensitive tribute to a son who never emerged from his journey into the rainforests of Central America. Riveting and complex, this is a book that will remain with you long after you’ve turned the last page.” — REBECCA MARTIN, President, Exploration Connections, and Founding Director, National Geographic Expeditions Council

“Out of an unbearable personal tragedy, Roman Dial has fashioned an unbearably powerful memoir. The Adventurer’s Sonis at once the narrative of a desperate search for a lost son, a poignant meditation on the depths of paternal love, and, in the end, a reaffirmation of the glory of exploration and adventure in the teeth of sorrow and loss.” — DAVID ROBERTS, award-winning adventure writer and co-author (with “Free Solo” star Alex Honnold) of Alone on the Wall

“In its emotional restraint and careful descriptions of the wild, this is a slow-burning tribute. A poignant, highly moving memoir of tragic circumstances and a lifelong love of exploring.” — Kirkus Reviews

“Gripping. … Dial paints a riveting, richly conflicted portrait of family legacies and the call of the wild.” — Publishers Weekly

"An explorer at heart, a scientist by profession, and a parent above all else, Dial guides readers on a suspenseful and heart-wrenching journey from the windswept Alaskan tundra to the impenetrable Costa Rican jungle. The Adventurer's Son is a poignant story about loss, but also about a father’s passion for adventure, his love for his son, and the bonds forged through their experiences in the natural world." — CAROLINE VAN HEMERT, author of The Sun Is a Compass: A 4,000-Mile Journey into the Alaskan Wilds

"Real-life mystery, travelogue, nature writing, and memoir all combine to make this book a must-read that you'll stay up all night to finish." — Book Riot

"[A] powerful memoir of a father's love of adventure and of his child. ... Complex and moving. ... Through the twists and turns of his search, Dial must follow his own compass to stay true to the son he knew." — Booklist

"This book will stay with readers long after the last page is turned...a provocative exploration of fatherhood and a moving tribute to a son whose wish as a small boy was to be called by his father’s name." — Anchorage Press

"A powerful testament to the bond between parent and child and the need to do the things we love, even when fear seeks to stop us. ... A beautiful book" — Library Journal

"Quite possibly the most poignant, honest look at the unique relationship between a father and a son that I’ve ever read."
— Hatch Magazine

"Dial passed his love of exploration to his son Cody, who at age 27 went missing in a Costa Rican jungle. Dial and his wife, Peggy, spent the next two years battling bureaucracies and nature, chasing down leads of drug dealing and kidnapping, all in a quest to find their son alive. ... A heartbreaking tribute to a chip off the old adventurer’s block." — Los Angeles Times

"The Adventurer's Son is a gripping account of a tight-knit family whose shared passion for the natural world leads them unsuspectingly to that harshest traverse of all, across time, life and death." — SETH KANTNER, bestselling author of Ordinary Wolves

“Dial tells the story of his two-year quest and the events that preceded it in a heart-wrenching, spellbinding book, The Adventurer’s Son.” — Enterprise-Journal (Mississippi)

"Dial’s book is interesting on two levels: as a gripping and suspenseful wilderness story (the noted Alaskan adventurer’s multi-year quest to figure out what happened after his son Cody disappeared in the Costa Rican jungle in 2014), and as an introspective meditation on the meaning of life." — Outside Magazine

This feature require that you enable JavaScript in your browser.
END_OF_DOCUMENT_TOKEN_TO_BE_REPLACED

This feature require that you enable JavaScript in your browser.
END_OF_DOCUMENT_TOKEN_TO_BE_REPLACED

This feature require that you enable JavaScript in your browser.
END_OF_DOCUMENT_TOKEN_TO_BE_REPLACED