The Feral Detective: A Novel (Hardcover) 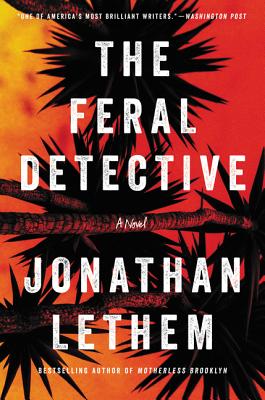 By Jonathan Lethem
$26.99
Email or call for price

“Lethem’s latest is a treat for fans and new readers alike. His personal brand of detective fiction (shrewd character descriptions, razor-sharp dialogue, and scene-setting that engages all five senses) has always been indebted to the (wild) West Coast — Hollywood specifically — so it’s unsurprising that The Feral Detective is as satisfying as his New York novels. A compelling and timely tale of why even going off the grid won’t save you from going off your rocker.”
— John Francisconi, Bank Square Books, Mystic, CT

Phoebe Siegler first meets Charles Heist in a shabby trailer on the eastern edge of Los Angeles. She’s looking for her friend’s missing daughter, Arabella, and hires Heist to help. A laconic loner who keeps his pet opossum in a desk drawer, Heist intrigues the sarcastic and garrulous Phoebe. Reluctantly, he agrees to help. The unlikely pair navigate the enclaves of desert-dwelling vagabonds and find that Arabella is in serious trouble—caught in the middle of a violent standoff that only Heist, mysteriously, can end. Phoebe’s trip to the desert was always going to be strange, but it was never supposed to be dangerous. . . .

Jonathan Lethem’s first detective novel since Motherless Brooklyn, The Feral Detective is a singular achievement by one of our greatest writers.

Jonathan Lethem is the bestselling author of eleven novels, including The Feral Detective, The Fortress of Solitude, and Motherless Brooklyn, winner of the National Book Critics Circle Award. He currently teaches creative writing at Pomona College in California.

“Being a Jonathan Lethem novel, natural, The Feral Detective has plenty to say about American society along the way.” — Newsday

“Lethem [is] a master of the genre-bending detective novel and eccentric characters.” — Huffington Post

“The Feral Detective investigates our haunted America in all its contemporary guises — at the edge of the city, beyond the blank desert, in the apartment next door. It’s a nimble and uncanny performance, brimming with Lethem’s trademark verve and wit.” — Colson Whitehead

“Like The Crying of Lot 49 as written and directed by Elaine May, The Feral Detective is hilarious and terrifying and wrenching. Phoebe is one of the grandest, funniest heroes I’ve come upon in a long time.” — Megan Abbott

“Wild, urgent, and very funny. As always, Lethem writes knowingly and brilliantly about weird, off-the-grid, wayward America. In his ever-more-electric prose, he illuminates both the barbarity and the beauty.” — Dana Spiotta

“I want to read a shelf of Heist. I want to make him my new Travis McGee, and that’s, seriously, the highest praise I know.”  — Joshua Cohen

“A funny but rage-fueled stunner. . . . Both [characters] are compelling, as are the desert setting and the vividly realized descriptions of its dwellers. . . . An unrelentingly paced tale. . . . Utterly unique and absolutely worthwhile.” — Booklist (starred review)

“Surrealistic, genre-bending. . . . The personal nature of Phoebe’s tectonic shift in the desert is palpable, made flesh by Lethem’s linguistic alchemy. . . . A haunting tour of the gulf between the privileged and the dispossessed.” — Kirkus Reviews (starred review)

This feature require that you enable JavaScript in your browser.
END_OF_DOCUMENT_TOKEN_TO_BE_REPLACED

This feature require that you enable JavaScript in your browser.
END_OF_DOCUMENT_TOKEN_TO_BE_REPLACED

This feature require that you enable JavaScript in your browser.
END_OF_DOCUMENT_TOKEN_TO_BE_REPLACED