My Sister's Bones: A Novel of Suspense (Paperback) 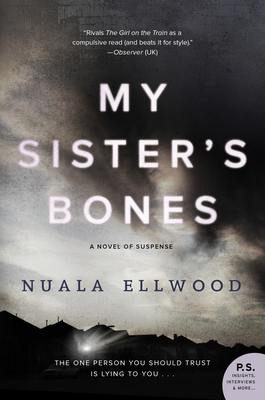 "Rivals The Girl on the Train as a compulsive read (and beats it for style). -- Observer (UK)

In the vein of Fiona Barton's The Widow and Renée Knight's Disclaimer, a psychological thriller about a war reporter who returns to her childhood home after her mother's death but becomes convinced that all is not well in the house next door—but is what she’s seeing real or a symptom of the trauma she suffered in Syria?

The One Person You Should Trust Is Lying to You…

Kate has spent fifteen years bringing global injustice home: as a decorated war reporter, she’s always in a place of conflict, writing about ordinary people in unimaginable situations. When her mother dies, Kate returns home from Syria for the funeral. But an incident with a young Syrian boy haunts her dreams, and when Kate sees a boy in the garden of the house next door—a house inhabited by an Iraqi refugee who claims her husband is away and she has no children—Kate becomes convinced that something is very wrong.

As she struggles to separate her memories of Syria from the quiet town in which she grew up—and also to reconcile her memories of a traumatic childhood with her sister’s insistence that all was not as Kate remembers—she begins to wonder what is actually true…and what is just in her mind.

In this gripping, timely debut, Nuala Ellwood brings us an unforgettable damaged character, a haunting , humanizing look at the Syrian conflict, and a deeply harrowing psychological thriller that readers won’t be able to put down.

Nuala Ellwood is the daughter of an award-winning journalist. Inspired by her father’s and other journalists’ experiences with post-traumatic stress disorder, she gained Arts Council Funding for her research into the topic and ultimately made it the main theme of My Sister’s Bones, her debut psychological thriller.

“A formidable debut thriller, MY SISTER’S BONES rivals The Girl on the Train as a compulsive read (and beats it for style).”
— The Observer (London)

“Ellwood’s stylish and complex thriller is full of clever twists and grabs you by the throat.”
— People (UK)

“Compelling … Brimful of tension, twists and darkness, this one grabbed me on the first page and didn’t let go.”
— Woman & Home (UK)

“A winner for those drawn to murky psychological suspense, like that of Ruth Rendell, Karin Fossum, and Flynn Berry in Under the Harrow.“
— Booklist

“An elegant, punchy thriller with a dark heart.”
— The Observer (London), Thriller of the Month

“Brimful of tension, twists and darkness, [MY SISTER’S BONES] grabbed me on the first page and didn’t let go.”
— Woman & Home (UK)

“In her thrilling debut…the ensuing twist is a juicy one. I’ll look forward to what this talented author has up her sleeve next.”
— Criminal Element

This feature require that you enable JavaScript in your browser.
END_OF_DOCUMENT_TOKEN_TO_BE_REPLACED

This feature require that you enable JavaScript in your browser.
END_OF_DOCUMENT_TOKEN_TO_BE_REPLACED

This feature require that you enable JavaScript in your browser.
END_OF_DOCUMENT_TOKEN_TO_BE_REPLACED