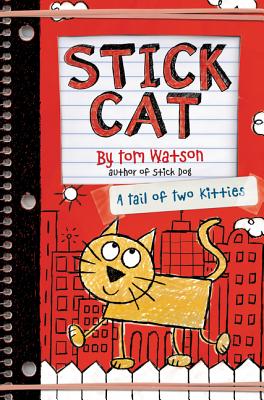 This is book number 1 in the Stick Cat series.

It’s a big day in the big city for Stick Cat and his best friend, Edith. There are treasures to hunt, songs to sing, pigeons to catch, and naps to take. But way up on the twenty-third floor, danger lurks just around the corner. Terrible noises and violent crashes trap a desperate man in the building across the alley. Stick Cat will need to navigate his way across the alley—and around Edith’s peculiar ways—to attempt a rescue.

Tom Watson lives in Chicago with his wife, daughter, and son. He also has a dog, as you could probably guess. The dog is a Labrador-Newfoundland mix. Tom says he looks like a Labrador with a bad perm. He wanted to name the dog "Put Your Shirt On" (please don't ask why), but he was outvoted by his family. The dog's name is Shadow. Early in his career Tom worked in politics, including a stint as the chief speechwriter for the governor of Ohio. This experience helped him develop the unique, storytelling narrative style of the Stick Dog books. More important, Tom's time in politics made him realize a very important thing: Kids are way smarter than adults. And it's a lot more fun and rewarding to write stories for them than to write speeches for grown-ups.

“This sequel to Stick Dog (2013) will have readers diving in and then begging for more adventures—canine, feline, or otherwise. The simple drawings might also inspire young readers to try their own hands at illustration. Chapters frequently end with cliff-hangers of sorts, encouraging readers to predict what might happen next.” — Booklist

“Watson’s knack for incredibly endearing characters means that readers will be invested in Stick Cat and Edith from the first page.” — Bulletin of the Center for Children’s Books

This feature require that you enable JavaScript in your browser.
END_OF_DOCUMENT_TOKEN_TO_BE_REPLACED

This feature require that you enable JavaScript in your browser.
END_OF_DOCUMENT_TOKEN_TO_BE_REPLACED

This feature require that you enable JavaScript in your browser.
END_OF_DOCUMENT_TOKEN_TO_BE_REPLACED