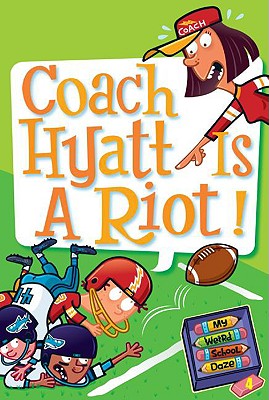 This is book number 4 in the My Weird School Daze series.

With more than 12 million books sold, the My Weird School series really gets kids reading!

In this fourth book in the My Weird School Daze series, the Pee Wee Football season is here! But A.J.'s new coach is crazy. She wants the boys to do push-ups in the mud. She wants them to pick up a car. She even wants to put girls on the team! You'll never believe in a million hundred years what happens in the big game.

Perfect for reluctant readers and word lovers alike, Dan Gutman’s hugely popular My Weird School chapter book series has something for everyone. Don’t miss the hilarious adventures of A.J. and the gang!

Jim Paillot lives in Arizona (another weird place) with his weird wife and two weird children. Isn’t that weird? You can visit him on his weird website at www.jimpaillot.com

“Even the most reluctant reader will be drawn in.”
— School Library Journal

“Even the most reluctant reader will be drawn in by the humor and repetitive silliness. Add where beginning chapter books are needed.”
— School Library Journal

This feature require that you enable JavaScript in your browser.
END_OF_DOCUMENT_TOKEN_TO_BE_REPLACED

This feature require that you enable JavaScript in your browser.
END_OF_DOCUMENT_TOKEN_TO_BE_REPLACED

This feature require that you enable JavaScript in your browser.
END_OF_DOCUMENT_TOKEN_TO_BE_REPLACED