House of Many Ways (World of Howl #3) (Library Binding) 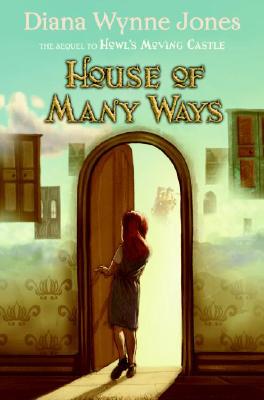 By Diana Wynne Jones
$18.89
Email or call for price

This is book number 3 in the World of Howl series.

“Can a teenage girl who does nothing much besides read books survive in a wizard's house, surrounded by strange and fearsome happenings? Yes, with a little help from a dog, a boy, a fire-demon, and a wizard disguised as a small boy! Whether or not you read Howl's Moving Castle, you are sure to be delighted by its sequel!”
— Carol Schneck, Schuler Books & Music, Okemos, MI

Charmain Baker is in over her head. Looking after Great-Uncle William's tiny cottage while he's ill should have been easy. But Great-Uncle William is better known as the Royal Wizard Norland, and his house bends space and time. Its single door leads to any number of places—the bedrooms, the kitchen, the caves under the mountains, the past, and the Royal Mansion, to name just a few.

By opening that door, Charmain has become responsible for not only the house, but for an extremely magical stray dog, a muddled young apprentice wizard, and a box of the king's most treasured documents. She has encountered a terrifying beast called a lubbock, irritated a clan of small blue creatures, and wound up smack in the middle of an urgent search. The king and his daughter are desperate to find the lost, fabled Elfgift—so desperate that they've even called in an intimidating sorceress named Sophie to help. And where Sophie is, can the Wizard Howl and fire demon Calcifer be far behind?

Of course, with that magical family involved, there's bound to be chaos—and unexpected revelations.

No one will be more surprised than Charmain by what Howl and Sophie discover.

In a career spanning four decades, award-winning author Diana Wynne Jones (1934‒2011) wrote more than forty books of fantasy for young readers. Characterized by magic, multiple universes, witches and wizards—and a charismatic nine-lived enchanter—her books are filled with unlimited imagination, dazzling plots, and an effervescent sense of humor that earned her legendary status in the world of fantasy.

This feature require that you enable JavaScript in your browser.
END_OF_DOCUMENT_TOKEN_TO_BE_REPLACED

This feature require that you enable JavaScript in your browser.
END_OF_DOCUMENT_TOKEN_TO_BE_REPLACED

This feature require that you enable JavaScript in your browser.
END_OF_DOCUMENT_TOKEN_TO_BE_REPLACED