Ariel: The Restored Edition: A Facsimile of Plath's Manuscript, Reinstating Her Original Selection and Arrangement (Hardcover) 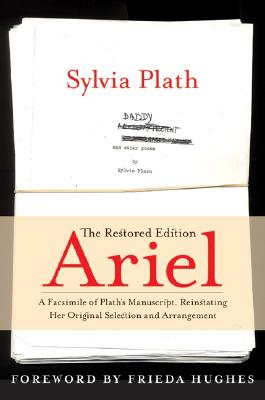 “Made up of poems that are so original in their style and so startlingly accomplished in their confessional voice that they helped change the direction of contemporary poetry, Ariel is a masterpiece.”  — New York Observer

Sylvia Plath's famous collection, as she intended it.

When Sylvia Plath died, she not only left behind a prolific life but also her unpublished literary masterpiece, Ariel. When her husband, Ted Hughes, first brought this collection to the public, it garnered worldwide acclaim, but it wasn't the draft Sylvia had wanted her readers to see. This facsimile edition restores, for the first time, Plath's original manuscript—including handwritten notes—and her own selection and arrangement of poems. This edition also includes in facsimile the complete working drafts of her poem "Ariel," which provide a rare glimpse into the creative process of a beloved writer. This publication introduces a truer version of Plath's works, and will alter her legacy forever.

Sylvia Plath was born in 1932 in Massachusetts. Her books include the poetry collections The Colossus, Crossing the Water, Winter Trees, Ariel, and Collected Poems, which won the Pulitzer Prize. A complete and uncut facsimile edition of Ariel was published in 2004 with her original selection and arrangement of poems. She was married to the poet Ted Hughes, with whom she had a daughter, Frieda, and a son, Nicholas. She died in London in 1963.

“One of the most devastatingly moving and universally beloved books of poetry published in the 20th century.”
— Time magazine

“It’s hard to read the original manuscript without trying to understand what Hughes was thinking when he left out certain poems and included others. She loved him. He hurt her. All of us who love her work are caught like children in that crossfire forever.”
— Los Angeles Times

“Made up of poems that are so original in their style and so startlingly accomplished in their confessional voice that they helped change the direction of contemporary poetry, Ariel is a masterpiece.”
— New York Observer

“...the publication of this ‘other’ Ariel will no doubt sustain the Hughes/Plath controversy for years to come, but we can be grateful for the insights provided by this restored edition.”
— Library Journal

“[Frieda] Hughes’ thoughts on her mother’s life and writing offer a calm, tender account of a life that has too often been fodder for sensationalist coverage.”
— Lisa Ko, author of The Leavers

“These are powerful poems, not outtakes and B sides, and if they expose Plath’s personal pain, they also enrich our sense of her state of mind at the height of her powers.”
— Time magazine

“Ariel: The Restored Edition finally puts the focus back where it belongs — on Plath’s poetry.”
— Village Voice

“...a poetic landmark of the decade....a coruscating book, painfully self-revelatory, brimming with a fierce, raw energy.”
— The Economist

“To women who wrote, this work was galvanizing. Sylvia . . . had a fully evolved voice.”
— New York Review of Books

“Frieda Hughes has had the courage to bring her mother back, not as a symbol, but as a poet. Her poems are here and will have the last word. They remain remarkable.”
— New York Review of Books

“Sometimes it takes a long time for a book to reach its readers in the form the writer intended. . . . Ariel: The Restored Edition does the job, and then some.”
— Seattle Times

“It’s like a belated gift from Plath to the ‘peanut-crunching crowd’ that follows her every mood, every thought, even many years after her death.”
— Buffalo News

This feature require that you enable JavaScript in your browser.
END_OF_DOCUMENT_TOKEN_TO_BE_REPLACED

This feature require that you enable JavaScript in your browser.
END_OF_DOCUMENT_TOKEN_TO_BE_REPLACED

This feature require that you enable JavaScript in your browser.
END_OF_DOCUMENT_TOKEN_TO_BE_REPLACED